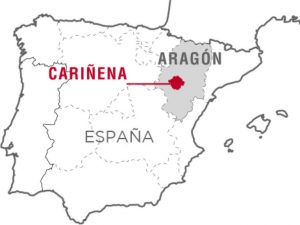 Roque Lorenzo Velez Lozano emigrated from Cariñena to La Habana, Cuba in 1774.  Cariñena is a “city” in the province of Zaragoza, in the autonomous community of Aragon, Spain. It’s really a village with a population of about 3,500 but it was famously granted the title of City in 1909 by King Alfonso XIII. If you go to Cariñena, you’ll call it a village or “pueblo” and you’ll call nearby Zaragoza a city. 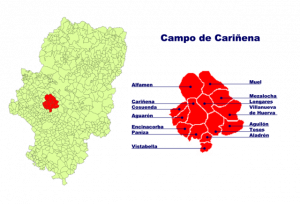 Cariñena is known for its wine and it also gives the name to the Cariñena grape (today called Mazuelo in Spain) although many varieties of grapes produce the rich wines from this region.  The Garnacha is my personal favorite.  In Roman times the area was known as Carae and it was recorded that in the 3rd century BC its inhabitants drank wine mixed with honey. Today the region is encompassed by vineyards and each September there is a fiesta celebrating the harvest that also coincides with a religious feast. Here are links to the spanish and english Wikipedia pages on Cariñena (they are different). 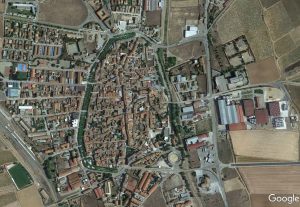 Satellite view of Cariñena – the tree-lined paseo is where the walls once stood. See the Plaza de Toros?

When I began to study the history of Spain and Cariñena, it became clear I must have been sleeping during European history classes. Today most texts describe the area as being inhabited by about 300 BC.  Nearby Zaragoza (a true “city” by today’s standards) began its life as Caesaraugusta by about 25 AD during the expansion of the Roman Empire. Cariñena supplied wine to the booming city and the export activities the Romans developed using the then-navigable Ebro River to reach the Mediterranean.

After the Romans came the Visigoths ~700 AD and then shortly thereafter the Muslims whose kingdoms stretched from the Middle East, across north Africa, and into the Iberian Peninsula. After 400 years of Muslim rule, the Christians returned in ~1118 and the town became a part of the Kingdom of Aragon when it was conquered by Alfonso I El Batallador in 1119. After this Christian conquest, the Collegiate Church of Santa María was built on the site occupied by the Muslim mosque, as seen in the sketch above.

Cariñena found itself in the middle of the many conflicts between the competing crowns of Castile and Aragon. Although Aragon directed the building of the wall to fortify it against attack by the Crown of Castile, the town was taken by the Castilian troops in 1363, and Pedro I (“The Cruel”) ravaged the entire village, cutting off the nose and ears of those who had defended her walls.  After retaking Cariñena, the King of Aragon granted the town a coat of arms as a reward for its loyalty where the central figure displays the loyal signs of a missing nose and ear. 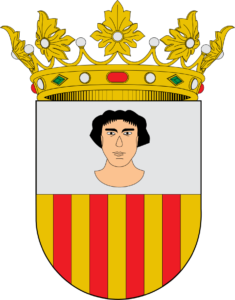 The shield of Cariñena

The Jews who lived under the Muslim caliphates of Al-Andalus were “tolerated” until they were expelled in 1339 when Cariñena’s synagogue was reestablished as the Iglesia Santo Cristo de Santiago.  Later, in 1492, the Catholic Monarchs conquered the Nasrid Kingdom of Granada and decreed expelled from all of Castile and Aragon. Today you could easily walk past Iglesia Santo Cristo de Santiago as it is tightly nestled among the shops and apartments along Calle Mayor.

In the 16th century the Consistorial House (the city hall or “ayuntamiento”) was built , a Aragonese-style Renaissance-style “palace”, a building with a floor in the 17th century with the typical Aragonese gallery. Attached to the town hall sits the “Fuenta de la Mora”, the fountain mentioned in other posts in this blog.

Some Moors remained in Castile and Aragon after the return of Christian rule with the heaviest concentrations in Aragon, mostly in the region of Zaragoza and this included Cariñena.  They were formally expelled in 1609 in a wave of similar action across the Iberian Peninsula. Nearby Zaragoza published its expulsion order on 10 May 1610 – see a copy here.

In 1694 the church Our Lady of the Assumption was built on the old collegiate church of Santa Maria, which had been destroyed in the War of the Pedros, attached to the Gothic tower of 1375. This is the church you see today when you visit.

The 1700s saw more war and then even the French decided they wanted to cross the Pyrenees and have a go at taking the region in the early 1800’s. Cariñena saw itself caught up in the Spanish Civil War in the early 20th century.

I certainly don’t do the long history justice, but what you should take away from the brief history lesson is that there is Christian and Muslim influence and it shows in the village, the architecture, and surrounding sites.

Some good sites for local information:

Today the village is friendly and small. The town hall is in the center along Calle Mayor and it’s where you’ll find La Fuente de la Mora, the fountain

they fill with wine each September for La Fiesta de la Vendimia, which celebrates the annual harvest. Beware – there are two events at this time and they are on separate weeks. One is the 7 day Christian feast for Santo Cristo de Santiago. Bulls run up and down Calle Mayor every day, multiple times a day and each evening has another bull event in the Plaza del Toros.  There’s food, music, dancing and a lot of drinking. Some events begin at 3AM!

The other event at this time of the year is a weekend event put on by the vineyards and the governing body of the Campo de Cariñena. Think tents along the street with each vineyard giving samples. There’s also a number of events at the Ayuntamiento and La Fuente de la Mora in La Plaza de España where you’ll see the red wine flowing. My point is this: know which event you’re trying to attend – it’s hard to figure out sometimes by casually searching the web.

Just around the corner from the town square (Plaza de España) you’ll find the Catholic church Nuestra Señora de las Asuncion which is where I obtained most of the family records.  Most of what you see today was built in the 1700’s except the 14th century tower as I mentioned earlier.

The wall that surrounded the city is mostly gone.  It’s been replaced by a tree-covered paseo with fountains and park benches. One tower does remain, and it’s in the southeast corner of town quite close to the Plaza del Toros.

Our Velez family comes from an area rich in history – get to know it with a visit!